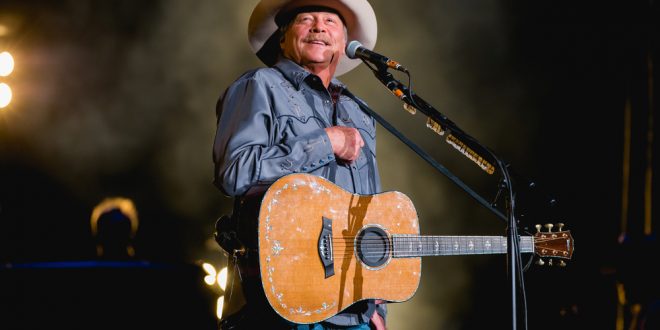 “It won’t kill me…” Alan says, but it does impact his ability to perform on stage.

Alan says, “I’ve been reluctant to talk about this publicly and to my fans, but I have this neuropathy – a neurological disease that’s genetic that I inherited from my daddy. There’s no cure for it, but it’s been affecting me for years. And it’s getting more and more obvious.”

During an interview with Jenna Bush Hager on NBC’s Today show (Tuesday, September 28th), Alan said that he has a rare condition known as “CMT” (Charcot-Marie-Tooth Disorder), which is related to muscular dystrophy and Parkinson’s disease.

Alan was first diagnosed a decade ago, and that his father and grandmother had it, as well as his oldest sister.

He added, “It’s not going to kill me – it’s not deadly. I know I’m stumbling around onstage, and now I’m having a little trouble balancing even in front of a microphone. I’m just very uncomfortable. I was starting to get so self-conscious up there…so if anybody’s curious why I don’t walk right, that’s why. I just wanted the fans and the public to know. I don’t want ’em to think I’m drunk onstage because I’m having problems with mobility and balance.”

Alan added, “I don’t want people to be sad for me; it’s just part of life. I’ve had a wonderful, beautiful life. I’ve been so blessed. It’s just good to put it out there in the open. In some ways, it’s a relief.”

Alan’s next concert is scheduled for October 8th at Nashville’s Bridgestone Arena. The show was postponed from last year.

Share
Previous Road Trip Review: “29: Written In Stone” – Carly Pearce
Next Hang Out With Liz at the Columbia Mall for a Meat Sale!