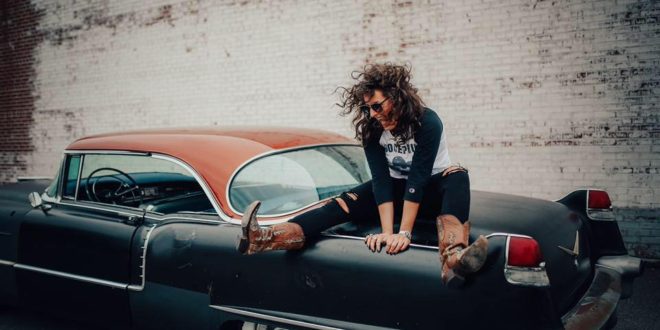 As heard on Clear Country Nights, my “Artist of the Week” is Hannah Dasher!

If this spit-fire, hair-jacked-to-Jesus (#TeamBigHairDon’tCare), Georgia native looks familiar to you; it may be because she opened up for Jon Langston at The Blue Note in Columbia, MO earlier this year.

Both her talent and personality pack. a. punch!

Whether she’s singing an original, like “Drinkin’ Out Loud”, or covering Collective Soul’s, “Shine”, her vocals are top-notch and captivating. She’s no newbie singer/songwriter on the scene, though. I had a chat with John Osborne (one-half of the Brothers Osborne) and in that chat, brought up how much I admired her. He told me that she’s been sluggin’ it out in Music City for more than a decade.

Though a modern stylist, her personality-packed lyrics and vocal delivery are steeped in traditional country, soul, rock, and blues.

Hannah comes across as an open book and has the ability to make you feel like you’re her best friend, in a room of 800 people. She has a zest for life that is incredibly contagious. Since performing at The Blue Note earlier in the year, she’s been busy! She performed at CMA Fest in Nashville and she’s also been traveling out on the road opening for the likes of The Cadillac Three, Gary Allan, Rodney Atkins, Justin Moore, Tyler Rich, Lynyrd Skynyrd and Hank Williams, Jr.

Hannah is signed to Sony/ATV Nashville and is working on her debut album, Heavy.

She’s also hilarious in person and on social media. Give her a “follow”!

Got to hang with Country radio royalty, this mornin.. 🙂 Thanks for the love @billcodywsm @charlie_wsm @wsmradio