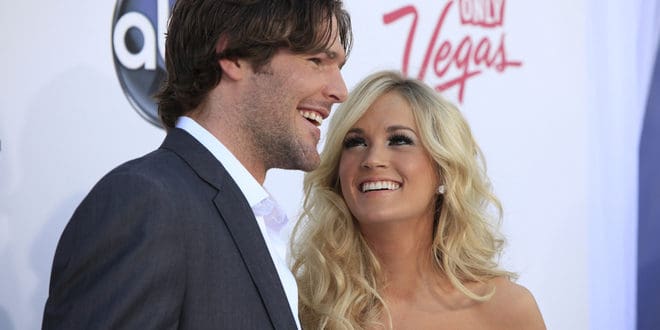 Marriage ain’t easy. Carrie Underwood and her husband Mike Fisher recently sat down with producers from the website I Am Second to explore their relationship and what makes it work.

Short answer: It is God.

The couple will celebrate 10 years of marriage this summer, but things haven’t always been easy for them. Mike, a retired NHL player (Nashville Predators – BOO!), is an avid hunter. Carrie is a vegetarian. So how did this match work?

Well, Carrie says it obviously caused some conflict early in their relationship, “I love animals and I love life so much that I always swore that I would never marry a hunter as a child. Not a million years,” Underwood says in Ep. 1 of Mike & Carrie: God & Country.

The short-form documentary, called Mike & Carrie: God & Country, is airing in four parts at I Am Second, which is a faith-based production company. Just from watching episode 1, it looks like an authentic look behind the curtain of Carrie and Mike’s relationship together, and their relationship with God.

In episode 2 they explore a very dark time for the couple and how Carrie confronted God after suffering a miscarriage. Get the Kleenexes ready.

The first episode is only about 7 minutes long and very well produced so definitely worth a few minutes of your day.

Watch All The Episodes Here

Ep 1: I Cry Easy
Mike and Carrie met and fell in love despite some drastic differences and learned early on that a firm foundation for the relationship was essential.

Ep 2: The Wrestle
In the midst of what felt like a broken promise, Mike and Carrie wrestled with God, having honest conversations about the miscarriages they experienced.

Ep 3: Just Blurt Out Whatever
As they raise their growing family, Mike and Carrie share their parenting journey and how it has helped them understand true unconditional love.

Previous Scotty’s Poddy: Episode 9 – “Into The Archives” with Florida Georgia Line
Next FGL’s “I Love My Country” Vs Kane Brown’s “Short Skirt Weather”