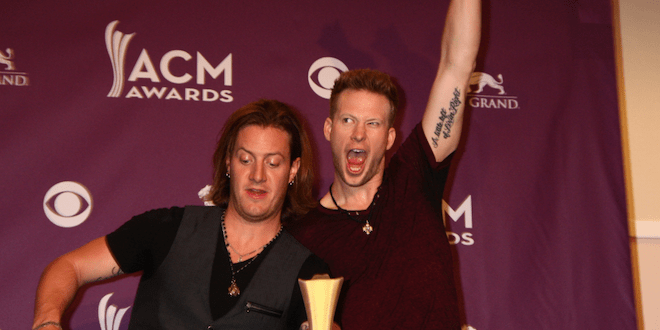 Florida Georgia Line‘s Tyler and BK get just as excited to hear themselves on the radio today as they did in 2012 when they released their first hit, “Cruise.”

They now have more than a dozen hits on country radio, but they still have that same excitement when they hear themselves on the radio today.

BK said, “I had just pulled in and ‘Cruise’ was on, 2012, put all the windows down, got outside, parked that thing, kept it on and just cranked it up and was celebrating. I’ve still got that video on my laptop somewhere but honestly, I still have the same feeling everytime, whether I’m in Florida, on the road or here (Nashville) listening to the radio. It’s freaking radio. It’s so powerful. It’s what we grew up on. It’s amazing. It’s never gonna leave and it’s a cool feeling. It makes you wanna just continue that magic and that work ethic that got you there and that’s gonna keep you there, so it never gets old.”

They will join Kenny Chesney on his Chillaxification Tour in STL on June 13th!

Thomas Rhett‘s brand new single, “Beer Can’t Fix,” features Jon Pardi and the message is that basically most bad situations can be made better by drinking a beer.

Thomas said, “We were just like, ‘Let’s name all these situations where, just maybe going out with your buddies and crackin’ a cold beer, maybe just takes your mind off of something for a second.’ Whether you just got broken up with, or you’re fishing and nothing’s happening, or you’re playing golf and you’re terrible at it – just kind of the light-hearted way to say, just take life a little bit easier.”