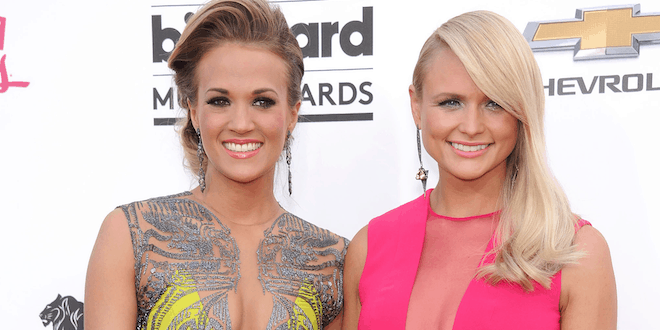 You probably saw what Miranda Lambert wrote recently about Carrie Underwood and why she should win Entertainer Of The Year, but Miranda has been praising her since..

Carrie made an appearance on the Ty Bentli Show where she heard a clip of Miranda talking about her winning the award, yet again. Then Carrie got emotional.

A lot of people are rooting for Carrie to win the award, but she does have some stiff competition… Garth Brooks, Eric Church, Chris Stapleton, and Keith Urban are all up for the award as well. The 53rd Annual CMA Awards will air tomorrow night on ABC.

Old Dominion is defending their title as reigning Vocal Group of the Year at the CMA Awards when they head into this week’s awards ceremony in Nashville.

While awards were never the band’s goal, Trevor Rosen says they learned that winning industry-voted awards took on a bigger meaning.

“You go into it and you go, ‘Awards are nice. That would be cool to win but that’s not why we got into it,’ and so you don’t put as much weight into that. I don’t think we did, and then after we won and we saw the ripple effect it had on all the people behind the scenes, you know? Not just the band but all of the people that work at our label and management and what a huge impact it had, and even just the other artists that congratulated us. Maybe we were guarding ourselves against it or whatever, but that was a big eye-opener to me is ‘this is a bigger thing than we realize it is.'”

Old Dominion is also set to perform during the CMA Awards.

Previous Did You See That Meteor!?
Next Live Broadcast At Jim Butler Chevrolet In Linn