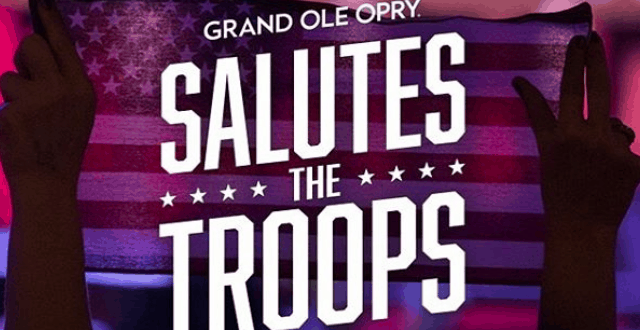 The annual Grand Ole Opry’s Salute the Troops is about to see a pretty amazing lineup.

Trace Adkins, Brantley Gilbert, Lee Greenwood, Craig Morgan, The Wild Feathers, and Mark Wills are scheduled to perform the Grand Ole Opry’s Salute the Troops. This event will honor the U.S. Military on May 21st.

The Opry and the United Service Organizations (USO) is set to invite men and women of the U.S. military along with their spouses, children, and parents to this special event. These military members will follow WWII sailor – 95 year old Ernie Andrus – on the red carpet into the Opry for the evening’s show.

Jason Aldean was awarded the Dick Clark Artist of the Decade trophy at the ACM Awards in Las Vegas Sunday, and now says country music’s future is in good hands.

Jason said, “I look out and I see guys like Luke Combs. I see Ashley McBryde and Maren Morris, Kane Brown. A lot of talent and a lot of future… It’s cool to see people that love country music and want to take it to the next step. The thing about country music is it’s gonna change. The way we do it now, this generation’s gonna do it a lot different from now. We do it a lot different from the guys that were before us so I think those guys are doing it right…”

Can’t thank my fans and country radio enough! What a ride it has been all these years and I owe it all to u guys. Having my hero pass the torch to me last night for the @acmawards Artist of the decade was something i will never forget. Thank u Mr. @georgestrait You will always be “The King”. #acmawards2019 #artistofthedecade