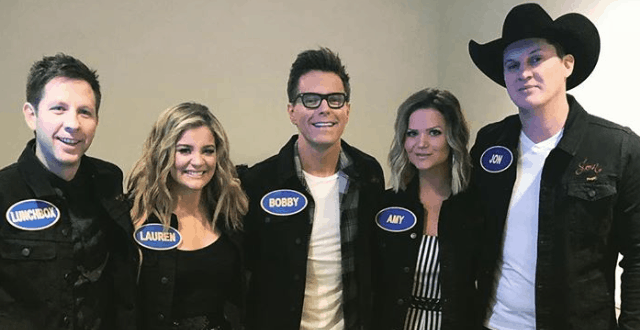 Which country stars are set to appear on Celebrity Family Feud this month?

Jon Pardi and Lauren Alaina are set to make an appearance on Celebrity Family Feud July 21st at 7p – along with radio personalties Bobby Bones, Amy Brown and Lunchbox. Bobby Bones is leading the team.

He actually broke the news months ago saying he was invited to play and “they said bring whoever you want. …family… friends, you can just find people on the street. Show up and bring people.”

The show donates the money won to the charity of the team leader’s choice. In this case,  St. Jude Children’s Research Hospital will get the money if our country heavy team wins. And no we don’t know who wins. All contestants are sworn to secrecy!

The Family Feud Team is ready.

Critics, reporters and editors tweeted out their first reactions to Disney’s live-action remake of The Lion King. The reaction was fairly positive across the board, with high marks for visuals and mixed marks for emotional resonance. “Visually, it’s stunning — an unparalleled technical achievement that’s like watching a nature documentary. Ultimately #TheLionKing will be a touching introduction to a timeless story for a new generation, but I’d never rewatch it over the original.” – IGN deputy managing editor of entertainment, Laura Prudom

Buzzfeed senior film reporter Adam B. Vary wrote, “#TheLiongKing is a landmark *visual* experience. I’ve never seen anything like it, and I think it’s going to change how we look at movies forever.” The film opens July 18th.