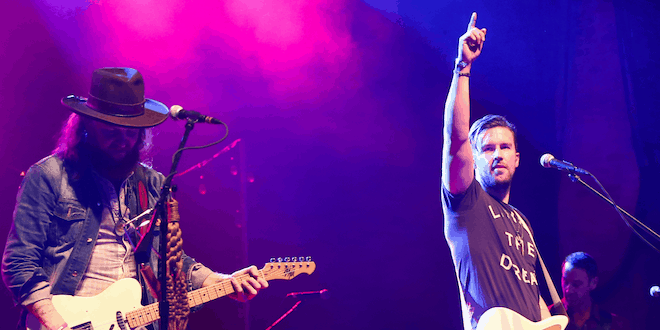 Brothers Osborne have released a new single which they hope will bring some cheer to everyone quarantined at home during this global pandemic. And it may be Catryna’s favorite to date!

The song is called “All Night.” John and TJ co-wrote it for their upcoming studio album.

John said, “This is a song that we wrote with a good buddy of ours named Andrew DeRoberts. We love to write very heartfelt, deep songs, but every now and again you need a song that’s just about having a good time and partying and letting your hair down and not overthinking it. And that’s the song I feel like the world could probably need right about now with all the stress and quarantine that we’re going through, so put on your dancing boots, crank this one up and commence to dancin’.”

Brothers Osborne will do a special livestream performance for both free and paid fan club members today (Thursday, May 14th) at 2:30p, but you must sign up to watch.

Get ready! John and TJ will be doing a special live stream for The Family! Both free and paid members will be able to watch so create an account if you haven’t already and tune in May 14 at 3:30pm ET/ 2:30pm CT. Link in bio. -Team BrOs

If you’re a fan of HGTV’s “Hometown” then you know who Ben and Erin are. Well, apparently they’re friends with Chris Stapleton.. Ben and Erin got to meet Chris backstage at one of his shows and during the meeting they discussed doing something with Chris’ Airstream. However, Chris and his wife, Morgane, couldn’t figure out what to do, so they gifted the Airstream to Ben and Erin. And it has since been named “Jolene” after Dolly Parton.