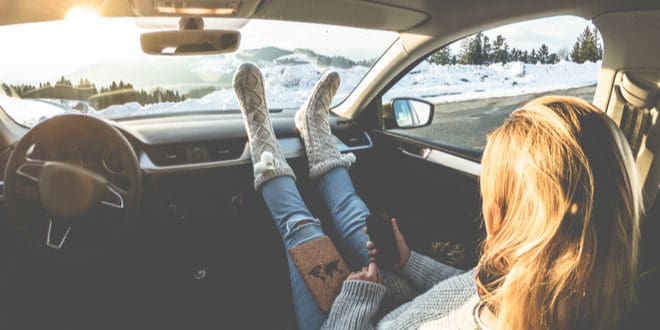 Reasons NOT To Put Your Feet Up

My wife does it ALL the time (until I pester her), and I see lots of people who do it while I’m driving around. But, PLEASE stop putting your feet on the dashboard or hanging them out the window… only saying this because I love ya!

An X-ray that seems to make its way around the internet has recently resurfaced again. It shows the aftermath of a car crash, where a woman in Wales was riding in the passenger seat with her feet up. Basically, the minor accident snapped one of her femur’s, broke her hip socket and the other is dislocated.

I’m sure you likely already know that it’s not safe to put feet up on the dash while the car is moving.

My wife says she does it because it’s more comfortable, so I often ask her “how comfortable do you think it would be if your knee hits your face at 150mph.” Yep, she gives me THAT look, but I think she knows I pester her because I don’t want her to get hurt. I don’t want you to get hurt either!

I feel like movies/songs play into the whole “feet up on the dash” as a way to paint the picture of freedom, fun and relaxation. In reality, it could take away some of your freedoms if you can’t walk, which isn’t fun or relaxing.

Reasons To NOT Put Feet Up On The Dash: 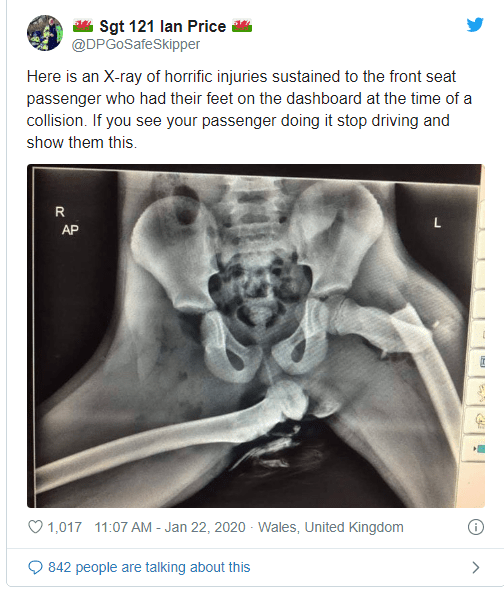 Another situation happened in Chickamauga, Georgia, to Audra Tatum, who was permanently disabled in 2015 by a minor accident. The point that should stand out is, everyone else in the car only had minor scratches and bruises. The airbag threw her foot into her face, breaking her nose, femur, and her ankle in four places.

Tatum talked to The Daily Mail about the accident, saying “basically my whole right side was broken, and it’s simply because of my ignorance. I’m not Superman. I couldn’t put my foot down in time.”

The Chattanooga, Tenn., Fire Department issued a vivid Facebook post years ago after the accident asking people to be aware of the harm that having your feet up on the dash during an accident could cause.

Good rules to follow while riding in a car: Seat belt on. Sit up straight. Feet on the floor.