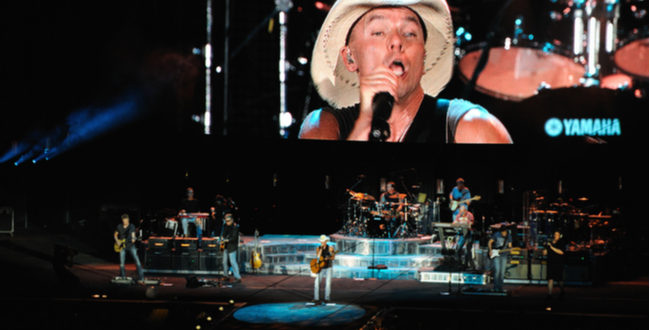 On the heels of having to postpone his 2020 Chillaxification tour, Kenny talks about the state of the touring business.

Kenny recently did an interview with the Los Angeles Times, and it was released just as he was having to announce the change to his 2020 touring plans, including his show at Busch Stadium June 13th.

First of all on a lighter note, Kenny says his last show before the coronavirus shut everything down…was a wedding.

“I can’t believe I’m telling you this, but I did a wedding in Florida at the beginning of March,” said Chesney, ranked at No. 18 on Pollstar’s list of the top touring artists of the previous decade with ticket sales of more than $600 million. “And I don’t play weddings. But it was worth it,” he added with a laugh.

Because someone close to him was getting married? “Nope,” he replied. “Just somebody that really wanted me to play his daughter’s wedding.”

It’s important to remember that when something like a tour getting cancelled happens, it affects a lot more people than just the performing artists.  Obviously this is something that weighs heavy on Kenny, and most certainly all of the other artists that have to make these tough decisions.

How many folks are we talking in your band and crew?
I have 120 employees. Thank God I don’t have to let anybody go this year. Now, if we don’t play the next two or three years, it’s really gonna change the dynamic of my life. And I’m not gonna lie — it’s expensive.

What’s it cost to keep everyone employed?
I don’t want to get into numbers. But it’s a lot of money. A lot of money. The initial shock of it, I looked at the numbers and went, Oh my God, this is overwhelming. And, look, it’s affecting my life — I’m not gonna say it’s not. But I had to make a decision if I was gonna keep my lifestyle the way it was or if I’m gonna take care of my people.

And as Kenny said in his press release about postponing this summer’s big tour, people are trying to figure out the best way to move forward.

Would you consider playing smaller venues if that got you back on the road faster?
Well, yeah, if I’m forced. I’m gonna play where I can play. I’ve thought about doing theaters with me and a couple of players.

There’s a lot of other interesting info in the article, Kenny fans especially should check it out here!