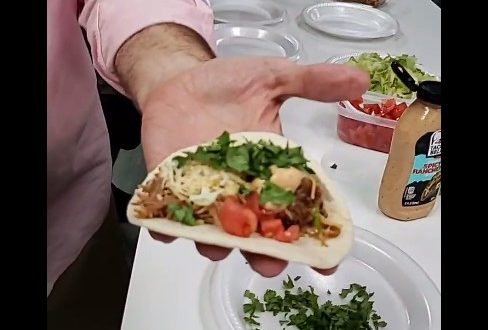 They turned out good, and thanks to the Clear listeners that suggested trying them!

(The Clear Crew is taking turns cooking something with pork, provided by the Missouri Pork Association, and sharing it with the rest of the crew for National Pork Month.  This is Scotty’s submission!)

My initial plan was just to do some basic pulled pork, which I have done somewhat successfully in the past.  But we all need to push ourselves occasionally to try something new!  We got lots of great suggestions from Clear 99 listeners, but I decided to go with pulled pork tacos.

I also considered smoking the meat on my grill, but that was going to be 9 hours babysitting my charcoal grill and it had already been a long week.  So I used my trusty crock-pot instead.

I actually took something from several different recipes, and here’s what I came up with!  (Not in normal recipe form, sorry!)

After that, it’s just whatever you like on tacos.  I used…

I even chopped up some fresh cilantro, and squeezed fresh lime juice over them like they do on TV.

The Clear Crew loved them, try them and let us know what you think!