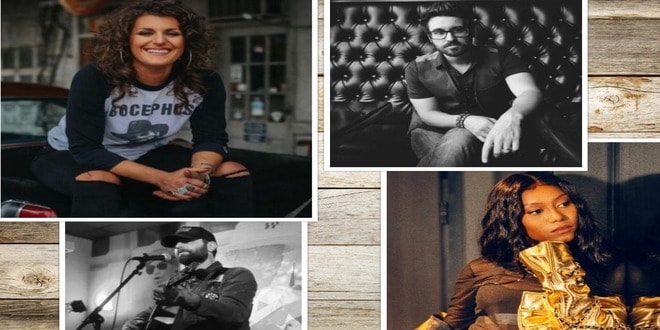 Be on the lookout for these artists on the rise!

If this spit-fire Georgia native looks familiar to you, it may be because she recently opened up for Jon Langston at The Blue Note in Columbia, MO. Both her talent and personality pack. a. punch! Whether she’s singing an original, like “Drinkin’ Out Loud”, or covering Collective Soul’s, “Shine”, her vocals are top notch and captivating. She has the ability to make you feel like you’re her best friend, in a room of 800 people. Her zest for life is just contagious. Though a modern stylist, her personality-packed lyrics and vocal delivery are steeped in traditional country, soul, rock, and blues. Hannah is signed to Sony/ATV Nashville and is working on her debut album, Heavy.

She’s also hilarious in person and on social media.

Sean McConnell is another act that has been through Mid-MO in the last six months. He opened up for Eli Young Band at The Blue Note back in October. Sean is no newbie to making music, though; he released his debut album back in 2000 at the age of 15! He has also had success as a songwriter, penning songs for artists Tim McGraw, Martina McBride, Brothers Osborne, and many more including Brett Young’s hit, “Mercy”. While most of his performances these days are backed by his four piece band, you can sometimes find him by himself on a stool with a guitar getting back to the basics. His songs are incredibly soulful and insightful.

His new record, Secondhand Smoke, was released everywhere on February 8, 2019.

I have to thank The Wood Brothers for the reason I know about this talented lady. She was out on the road with them recently and … well.. here, watch:

” ‘Pretty much every song I’ve ever written is a country song in some way,” she says, going on to cite her co-writes on such hits as Rihanna’s “California King Bed,” Pitbull’s No. 1 smash “Timber,” and “Somethin’ Bad,” her Country No. 1 for Miranda Lambert and Carrie Underwood, as examples. “So it’s funny that I’m now being myself and writing songs about my childhood and they naturally have this dark, swampy, country-western feel. I didn’t do that on purpose. That’s just in me from growing up in the South.’

In some ways, the country-soul sound of Priscilla Renea’s game-changing new album, Coloured, finds the singer and chart-topping songwriter coming full circle. When it came time to title the album, Renea knew her choice could be seen as provocative, but if you look at the way it’s spelled, with a “u,” the word “our” appears in the middle — a statement of inclusivity. “When I went to the Grand Ole Opry, there were photos of two black people hanging up on that wall backstage,” she continues. “One of them was Chuck Berry and the other was Darius Rucker. And I thought, ‘Well, you know what? I want my picture up there. I want it right here,’ and I touched a space on the wall that was empty.’ “.

Josh Morningstar is a songwriter out of Funkstown, MD. He keeps a vigilant writing schedule in Nashville when he isn’t playing shows on the road. As a free agent, he writes in Music City with all major publishers. His songs are a bit on the “out law” side of the Country spectrum. This is reflective with his current hit with artist Cody Jinks, “Must Be The Whiskey,” which is at radio across the United States. His EP, The Plea, was released in 2018.