I ate in Kansas City this weekend.  In fact I tried to eat all of it.

In case you’re headed that way looking for some options, I thought I’d share what I found.

It’s like a typical BBQ place, but a little fancier maybe?  I had a combo plate with brisket, chicken & ribs, all very good.  But their Apple Coleslaw really stood out.  It’s nothing fancy, but it’s delicious! 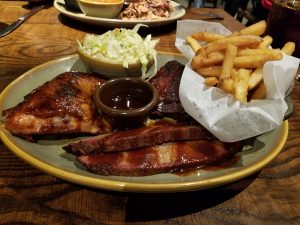 So was dessert, a warm apple crumble thing with ice cream. 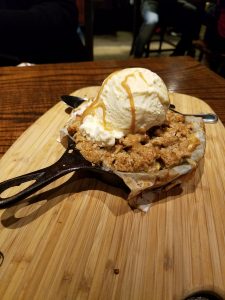 This was a trendy-kind-of-place on The Plaza.  Trendy/hipster isn’t my go to, but that was part of the point of the weekend, trying new things!  The food here was delicious as well.  I had the Waffle Sliders, and the warm syrup had pecans in it.  Yum! 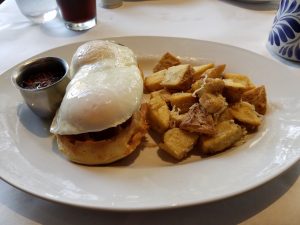 My pretty friend in the Mizzou hoodie had the Johnny Cake Benedict with
crab cakes, poached eggs, old bay hollandaise, and scallions. 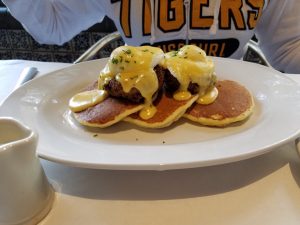 It seems to me that Mac & Cheese is the hot new side dish, because after a week in Orlando and a weekend in KC, I saw it on every menu in every restaurant I was in.  BTW, that’s not a complaint, I think it’s a fine breakfast option… 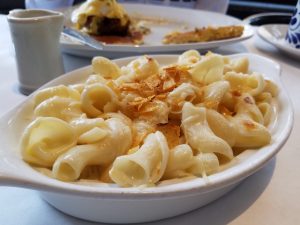 Coffee – Kaldi’s on The Plaza 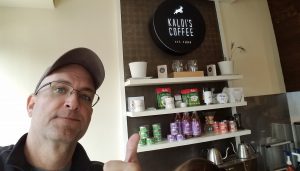 By this time I was tired of being the guy taking pictures of his food, so it’s mostly links from here on out!  It’s an Italian chain restaurant, but it was delicious as well.  Just a tip, they serve family style so the smallest portion you can get is for three people.  Again, not a complaint. 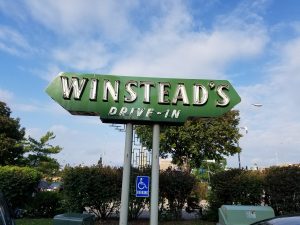 One of those cool “old school Kansas City tradition” type places.  It’s not a drive-in anymore but they’ve been cooking up steakburgers and diner food in KC since 1940.  I recommend the double with cheese & onion rings.

Speaking of old school Kansas City traditions, we also make a stop at Topsy’s Popcorn.  My pretty friend’s Grandma used to take here there when she was a kid.  Neat little store with lots of treats & history.

That sounds like a lot, but we didn’t even put a dent in our list of places we want to check out.  We’ll be heading back soon, but not until I can get a few bike rides in.  #MustBurnSomeCalories