It’s a family dish that my Mom’s Mom used to make, and I love it.  For years now I’ve been bringing it to get-together’s at work, and I’m always amazed that hardly any ever gets eaten… 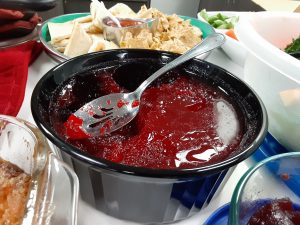 What’s wrong with you people!?

For several years I was convinced that the reason nobody tried it, was that it would always end up on the dessert table.  Well of course nobody is gonna choose jello when it’s on the same table as pumpkin pie, pecan pie, apple pie, Christmas cookies, fluffy chocolate smores pie with graham cracker crust, etc!

So this year at our Zimmer Thanksgiving feed I MADE SURE it was with all of the other salad-type sides.  I even positioned it next to the cranberry sauce, because it’s appearance is much more festive looking than that purple goop shaped like a can!

Didn’t matter, you see the result above.

However several co-workers DID say that they thought it was good, and hoped I would bring it again.  Including Sofia who made the comment about it tasting like Christmas!

(As of this writing Liz has yet to try it, stay tuned)

Anyway, here it is…

That’s it.  And if you try it I’d love to know what you think!  Unless you don’t like it, then keep it to yourself…

Share
Previous Alan Jackson Collaborates With His Daughter On New Song
Next Baby On The Way for Maddie and Tae’s Taylor Kerr!!!