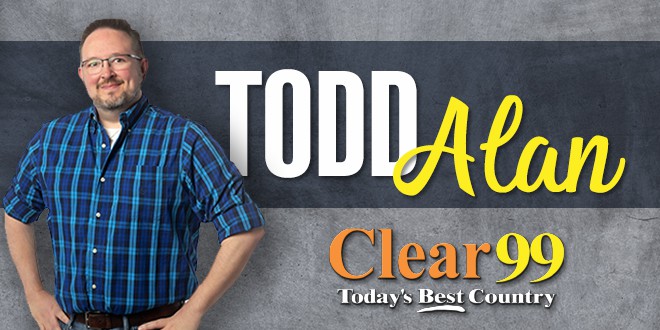 Hey there, it’s Todd Alan. I couldn’t be happier to be a part of the Clear 99 team.

I am originally from East Central Illinois. I grew up around the Champaign-Urbana area (please don’t hold that against me). My hometown has about 700 people in it, and that is if you are counting the pets in that population. When people ask me why I got into radio… I usually tell them puberty. My voice started to change and people kept telling me that I should do something with my speaking voice. Since I really can’t sing (even though I do really enjoy karaoke) radio seemed like a good choice. You mean I could get paid to talk and listen to music? I could be of service to my local community just by talking? Sounds good to me.

I went to college at Eastern Illinois University. I majored in Speech Communications focusing on Radio/TV/Film. No minor. Who really needs a backup plan? While at EIU, I actually had a class with former Dallas Cowboy quarterback and current broadcaster Tony Romo. Now that I think about it, there have been a lot of NFL players/coaches coming out of EIU… Sean Payton with the Saints, QB Jimmy Garoppolo with the 49rs, and former coach Mike Shanahan just to name a few.

While in college, I interned at Walt Disney World as part of their College Program. I was a tour guide at the Great Movie Ride (which I guess isn’t even down there anymore). While there I got to meet Tom Hanks, Tim Allen, Mark Hamill, Aerosmith, Adam Sandler and former President Jimmy Carter.

I have an unhealthy obsession with Superman. He actually “died” in the comics on my birthday. So for some reason that connected with me. I actually have enough “stuff” that I have a Superman room set up in my apartment to hold it all. One of my most prized possessions is an autographed Christopher Reeve photo. Just ask, I am always wearing something Superman.

I love being here in Central Missouri and am really looking forward to calling this area home for years to come. Clear Country, I am here to stay.

Share
Previous Aric Bremer
Next Liz and Scotty in the Morning