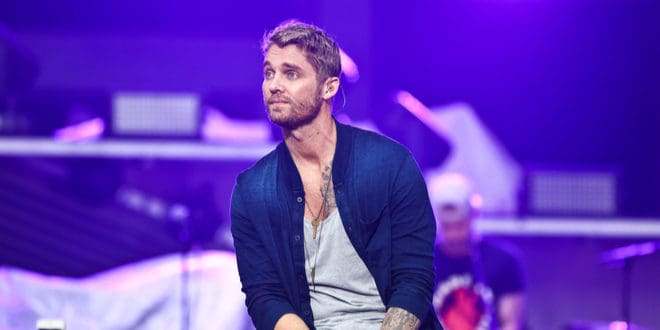 Starting this new segment to hopefully let you get to know some of the “new faces of country music” a little bit better. This week we’ll focus on Brett Young.

If you listen to country music on a regular basis then you likely know Brett Young’s music, but maybe you didn’t realize he was the artist singing them.

On occasion out at events I’ll ask people about some of the newer artists, and almost without fail when I mention Brett Young people will say, “I know the name, but not quite sure what he sings.” I’ll mention some his songs like, “Mercy,” “In Case You Didn’t Know,” “Like I Loved You,” and then whomever I’m talking with will be like, “OMG… Love him!”

I kind of chalk it up to the fact there’s a lot of new artists in the format right now, so it can get a bit confusing distinguishing one from the other. I think this guy’s going to be around for a while; he’s super talented. Soooo…  decided to write this post to give you a little info about him so you can get to know him a little better.

1. Brett Young is a SEC boy. He played college baseball for the University of Mississippi. Brett was actually scouted by a few MLB teams coming out of high school, but decided to go to college where an elbow injury halted his career. Though, I think it worked out ok for him in the long run. 🙂

2. Dude is tall. You could put Trace Adkins and him together on a basketball team and they could score some points. Brett is 6’6, which makes him one of the tallest guys in country music. In case you were wondering, Matt Stell (6’7) and Ray Benson (6’7) are listed as the tallest folks in country music.

4. Brett Young’s a new Daddy! His wife Taylor and he welcomed their first child, Presley Elizabeth, to the world on October 21, 2019. Tried looking it up, but couldn’t find out if she was named after Elvis.

5. As is the case with many country singers, Brett started honing his skills by leading worship services at his local church. His Dad was the Minister.

6. He’s watched every episode of Dawson’s Creek… more than once. Being a kid of the 90s this was also one of my favorites. Yes, I had a BIG crush on Joey (Katie Holmes). 🙂

7. His drink of choice is Jack Daniel’s Tennessee Whiskey.

8. He watches Christmas movies all year long! His favs are “A Christmas Story” and “Elf.”

9. I feel this is a very important one to add. He says he doesn’t want to include any material in his songs that he wouldn’t want his own kids hearing while in the car, so he promises to always have G-rated content in his songs.

10. Brett likes to cook. He says he knows his way around the kitchen, but will be the first to admit that if his wife or Mom walk into the room, then he immediately gets out of their way because he’s not on their level.

Brett Young Songs: He’s had four straight number one songs, which are “Mercy,” “In Case You Didn’t Know,” “Like I Loved You,” and “Here Tonight.”

What new country artist would you like to know more about? Give suggestions in the comment section below and I’ll look to feature them soon.