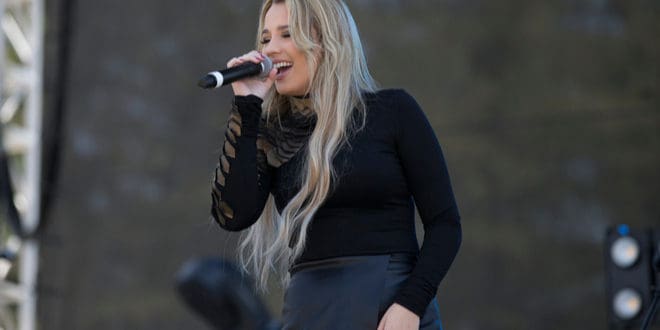 Coming off of a strong showing on American Idol, Gabby Barrett figured a record deal would be a lock.

Unfortunately, this was not the case for her so she got back to her roots, worked tirelessly, and focused her efforts on her songwriting. The result, she has one of the fastest-growing songs on the country charts with “I Hope.”

Story Behind The Song:

She was working with a couple of songwriters in Nashville around Halloween, when one said to her, “Let’s write a breakup song where the guy does the girl bad, but the girl still kinda wishes the guy well in the end, like, ‘Yeah, no bother, nothing’s wrong.'” She told TheBoot.com that she was like, “Yeah, no. That’s not gonna work. That can’t work, because I just don’t recall that happening when we get done wrong.”

Well, it’s working for Gabby, as she’s on her way to claiming her first country hit.

She thanks Carrie Underwood for all the advice that she’s given to her since American Idol, being one of the most successful alums from the show.

Her dad was a maintenance worker for Goodwill in Pennsylvania. He quickly realized her passion and talent for singing so he connected her to a music program at a nearby African-American church, because they were the best singers he had heard. The first time she ever performed on her own was at a sports sports bar in Pittsburgh. Gabby told People Magazine that “she knew immediately that this would be her life.”

Blaise Barrett, Gabby’s Fathers, had to make a lot of sacrifices over the years to help Gabby’s dream take flight. From working maintenance at Goodwill to cleaning apartments at night to make some extra money, he was there.  And, he still found time to get Gabby to gigs all over the place so he definitely should be in running for “Dad Of The Year.”

When it came down to making the decision between college and music she says, “it was very hard-core deciding, if that makes sense. My dad and I sat down and we talked, and we both agreed that ‘there’s no Plan B, no Plan C. This is what you’re going to do. You’re not going to college, and we’re going to make something of this.’ And so that’s what we did.”  – People Magazine

Gabby has three sisters and four brothers, and since she is on the road most of the time, she says she gets homesick a lot. Thankfully she says sometimes her brothers and sisters get to tag along while she’s out on the road. She love the familiarity that brings to her crazy life.

You can watch her perform live at Ballpark Village in St. Louis on March 26th.

Here are some quick facts about Gabby Barrett:

1. She’s signed with Warner Brothers Nashville after her stint on American Idol in 2018.

3. Gabby has a song that is rising on the charts called “I Hope.”

4. Gabby is one of eight children.

5. She has recently shared the stage with superstars like Luke Bryan, Bebe Rexha, Sugarland, Chris Lane and Carrie Underwood

6. Gabby is currently working on her debut full-length album.

7. She was bullied in High School so ended up being taking online classes.

9. She loves all things fashion. One of her favorite parts of American Idol was working with the hair & makeup teams.