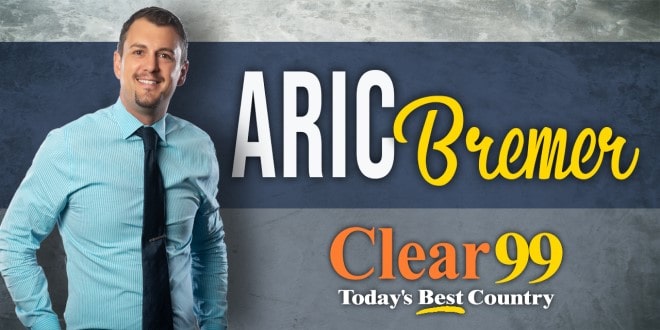 Love my family… my country… God… the Cardinals and Tigers…

I’ve never been able to get a souvenir with my name on it…no key chains, coffee mugs or wristbands…they only make those spelled “Eric”… But as I’ve gotten older, it’s made for quite a conversation starter… and people remember me as Aric with an “A”…

I literally fell in love with the thought of being a radio DJ when I was 9 years old when Clear 99 came on the air.

The late Teresa Davis hired me on my first day at Mizzou back in August of 1999 to work part-time on Clear 99 and then from late 2000 until November of 2005, I worked Afternoons on Clear 99 which was a dream come true.

What I’m most excited about is getting to know the listeners again…all of the listeners that we’ve had since I was on the air in 1999 and all of the new listeners we’ve gained since I’ve been gone. I’ve worked at other radio stations over the years and the thing is, Clear 99 listeners are special. They are more loyal than anyone I’ve ever met: loving, kind, and passionate, so this should be a really fun journey together!

Keith Urban and Garth Brooks are my two favorite Country artists. I really relate to their music and seeing them perform their music LIVE has presented some of the greatest nights of my life!  So, knowing I’m gonna get to see a bunch of live country music again is really exciting to me!

If you wanna know something about Cardinals trivia I’m the guy to ask. I was at Game 5 in 2006 and Game 7 in 2011 when the St. Louis Cardinals won their 10th and 11th World Series Championships and I can’t wait for us to win our 12th!  Hopefully sooner than later.

And as for the Missouri Tigers, I’ve been the Public Address Announcer for the Missouri Tiger Men’s Basketball team. I’m the guy that gets to do the Starting Lineups and make all of the announcements during the game.  I’m looking forward to our Tigers getting back to playing winning basketball next season and I believe we will.

Drop me a line as I look forward to hearing from you soon!