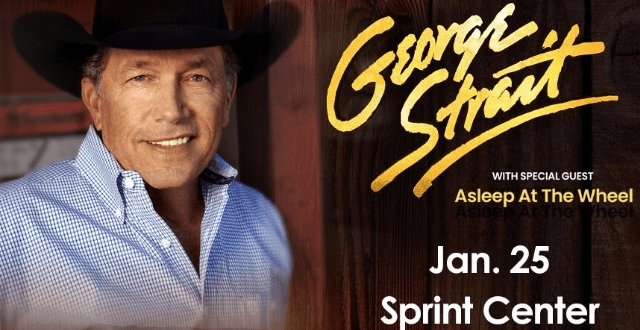 George Strait Is Coming To Missouri!!!

WHO | George Strait
WHAT | Strait to the Heartland Show
WHEN | Saturday, January 25th, 2020
WHERE | Sprint Center, Kansas City, MO
TICKETS | Tickets go on sale May 17th

Strait to the Heartland Show Tickets on Sale Friday, May 17

KANSAS CITY (May 6, 2019) – After releasing a record 27th album that skyrocketed to No. 1 on Billboard’s Top Country Albums Chart with Honky Tonk Time Machine, country music icon George Strait has confirmed a rare concert appearance at Sprint Center. The Country Music Hall of Famer returns to Kansas City for a “Strait to the Heartland” show on Saturday, Jan. 25, 2020.

Tickets start at $75 and go on sale to the general public on Friday, May 17 at 10 a.m. at SprintCenter.com.

With an unmatched 60 singles hitting the top of the charts during the span of his 30-year career, Strait is the undeniable “King of Country Music.” Strait is the only act in history to have a Top 10 hit every year for over three decades and has sold nearly 70 million albums and earned more than 60 major entertainment industry awards, including induction in the Country Music Hall of Fame in 2006. Joining the King of Country in Kansas City will be Special Guest Asleep at the Wheel.

A limited number of tickets will be available for purchase by George Strait Fan Club members during a pre-sale period beginning at 10 a.m. on Monday, May 13. American Express® Card Members can purchase tickets before the general public beginning Friday, May 10 at 10 a.m. through Thursday, May 16 at 10 p.m.

Following the completion of his record-breaking Cowboy Rides Away Tour in 2014, Strait has performed limited engagements including 22 sold-out “Strait to Vegas” shows and a one-night-only show at Atlanta’s Mercedes-Benz Stadium on March 30.

Share
Previous Mizzou Baseball Vs. Florida | Pack The House
Next May Is Stroke Awareness Month – Know The Facts